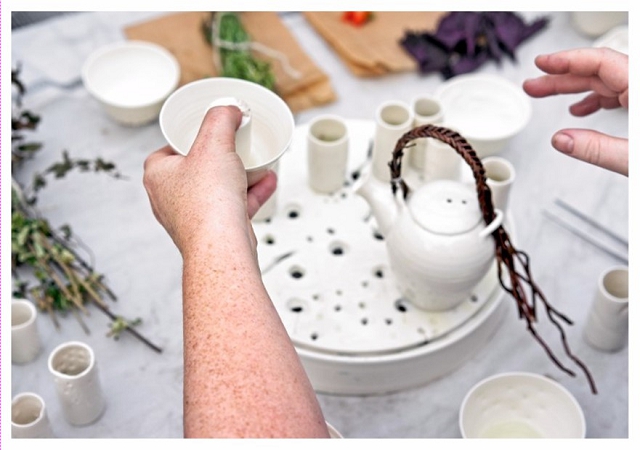 In 2017 Liselore Halink of LiLo Ceramics was invited to create a Tea Set by the foundation “ZaaiGoed”. This foundation activates the minds of elderly people with Alzheimers decease or a visual handicap. A sense garden in Haarlem was especially designed for this purpose and explores the senses in their minds, like colour, smell, taste, texture and sound. By organizing activities that stimulate their senses and giving them a lot of special attention, elderly people (with Alzheimers) turn out to be capable of much more than we think. The activities also create social interaction between this vulnerable group and the Haarlem community. Part of this project, is inviting an artist each year, who creates a piece of art, inspired by the elderly and the garden. Interaction with these great people, is an important part of that.

Drinking tea creates connection between the invited and makes them telling stories. Liselore came up with the idea to create a Gong Fu Cha Tea Set. This ancient Chinese way of drinking tea opens up the senses one by one until they are all activated. By the warmth of the cups in your hands, the smell of the tea, the colour of the tea, the sound of pouring water and the rustle of the tea leaves. And very important, the taste of the tea.

Liselore designed the tea set in such a way that the ceremony members experience the evolution of Alzheimers decease. In the beginning the first signs are small nuisances. But as the decease evolves, the problems grow and make life extremely hard. Liselore created small holes in her porcelain teaset, created by things she and the elderly found in the sense garden. This symbolizes the way daily life changes for the patient but also the amount of holes you see on the X-ray of a brain of somebody with Alzheimers. The further the decease progresses, the more holes you’ll see. The first cups have small holes that makes drinking only a bit uncomfortable. You have to pay attention which side you use, in order no to spill the tea. The last cups are collapsing and have so many holes that makes it impossible to use them. It shows the harsh side of Alzheimers.

After working on the tea set and with the group for 3 seasons, Liselore organized several Tea ceremonies on several occasions. She did not use tea, but the different herbs from the sense garden, that stand for the 5 different senses. The ceremony did not only open up people’s mind in this way but also gave people the opportunity to tell stories about what Alzheimers means for them. During the last ceremony at Galerie SPW59 in Haarlem, the teaset was auctioned to contribute to the ‘ZaaiGoed’ foundation. 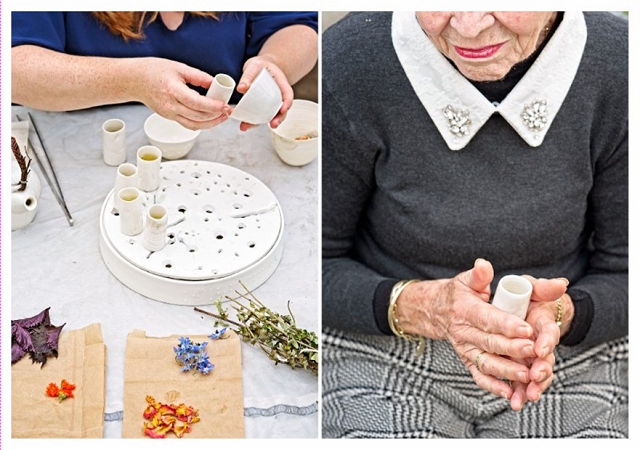